This project page describes our paper at the 1st NIPS Workshop on Large Scale Computer Vision Systems. This work also corresponds to the submission of the UPC team participating in the ActivityNet Challenge for CVPR 2016.

This work proposes a simple pipeline to classify and temporally localize activities in untrimmed videos. Our system uses features from a 3D Convolutional Neural Network (C3D) as input to train a a recurrent neural network (RNN) that learns to classify video clips of 16 frames. After clip prediction, we post-process the output of the RNN to assign a single activity label to each video, and determine the temporal boundaries of the activity within the video. We show how our system can achieve competitive results in both tasks with a simple architecture. We evaluate our method in the ActivityNet Challenge 2016, achieving a 0.5874 mAP and a 0.2237 mAP in the classification and detection tasks, respectively.

What Are You Going to Find Here

This project is a baseline in the activity classification and its temporal location, focused on the ActivityNet Challenge. Here is detailed all the process of our proposed pipeline, as well the trained models and the utility to classify and temporally localize activities on new videos given. All the steps have been detailed, from downloading the dataset, to predicting the temporal locations going through the feature extraction and also the training.

You may also want to refer to our publication with the more human-friendly Chicago style:

This work is the result of the bachelor thesis by Alberto Montes at UPC TelecomBCN ETSETB during Spring 2016.

We received the best poster award at the LSCVS workshop 2016 with the following poster, that you can download from here. Photos from the bachelor thesis defense and the NIPS workshop and award can be found in this album. This repository is structured in the following way:

We have used Theano in order to develop the project because it supported 3D convolutions and pooling required to run the C3D network.

The pipeline proposed to face the ActivityNet Challenge is made up by two stages.

The first stage encode the video information into a single vector representation for small video clips. To achieve that, the C3D network [Tran2014] is used. The C3D network uses 3D convolutions to extract spatiotemporal features from the videos, which previously have been split in 16-frames clips.

The second stage, once the video features are extracted, is to classify the activity on each clip as the videos of the ActivityNet are untrimmed and may be an activity or not (background). To perform this classification a RNN is used. More specifically a LSTM network which tries to exploit long term correlations and perform a prediction of the video sequence. This stage is the one which has been trained.

The structure of the network can be seen on the next figure. 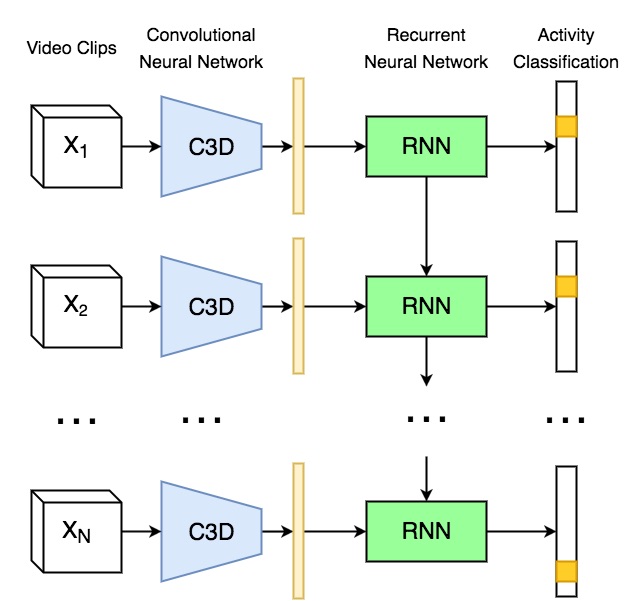