This is the project page of the UPC team who participated in the VQA challenge in the associated workshop at CVPR 2016.

Deep learning techniques have been proven to be a great success for some basic perceptual tasks like object detection and recognition. They have also shown good performance on tasks such as image captioning but these models are not that good when a higher reasoning is needed.

Visual Question-Answering tasks require the model to have a much deeper comprehension and understanding of the scene and the realtions between the objects in it than that required for image captioning. The aim of these tasks is to be able to predict an answer given a question related to an image.

Different scenarios have been proposed to tackle this problem, from multiple-choice to open-ended questions. Here we have only addressed the open-ended model.

What are you going to find here

This project gives a baseline code to start developing on Visual Question-Answering tasks, specifically those focused on the VQA challenge. Here you will find an example on how to implement your models with Keras and train, validate and test them on the VQA dataset. Note that we are still building things upon this project so the code is not ready to be imported as a module but we would like to share it with the community to give a starting point for newcomers.

This project has been developed as part of the bachelor thesis of Issey Masuda during Spring 2016 at UPC TelecomBCN ETSETB. The work was graded with the maximum score of 10.0/10.0 (A with honors). The thesis report is available on arXiv and UPCommons.

You may also want to refer to our publication with the more human-friendly style:

We have used Theano in order to develop the project and it has not been tested with TensorFlow.

The main files/dir are the following:

We have participated into the VQA challenge with the following model.

Our model is composed of two branches, one leading with the question and the other one with the image, that are merged to predict the answer. The question branch takes the question as tokens and obtains the word embedding of each token. Then, we feed these word embeddings into a LSTM and we take its last state (once it has seen all the question) as our question representation, which is a sentence embedding. For the image branch, we have first precomputed the visual features of the images with a Kernalized CNNs (KCNNs) [Liu 2015]. We project these features into the same space as the question embedding using a fully-connected layer with ReLU activation function.

Once we have both the visual and text features, we merge them suming both vectors as they belong to the same space. This final representation is given to another fully-connected layer softmax to predict the answer, which will be a one-hot representation of the word (we are predicting a single word as our answer). 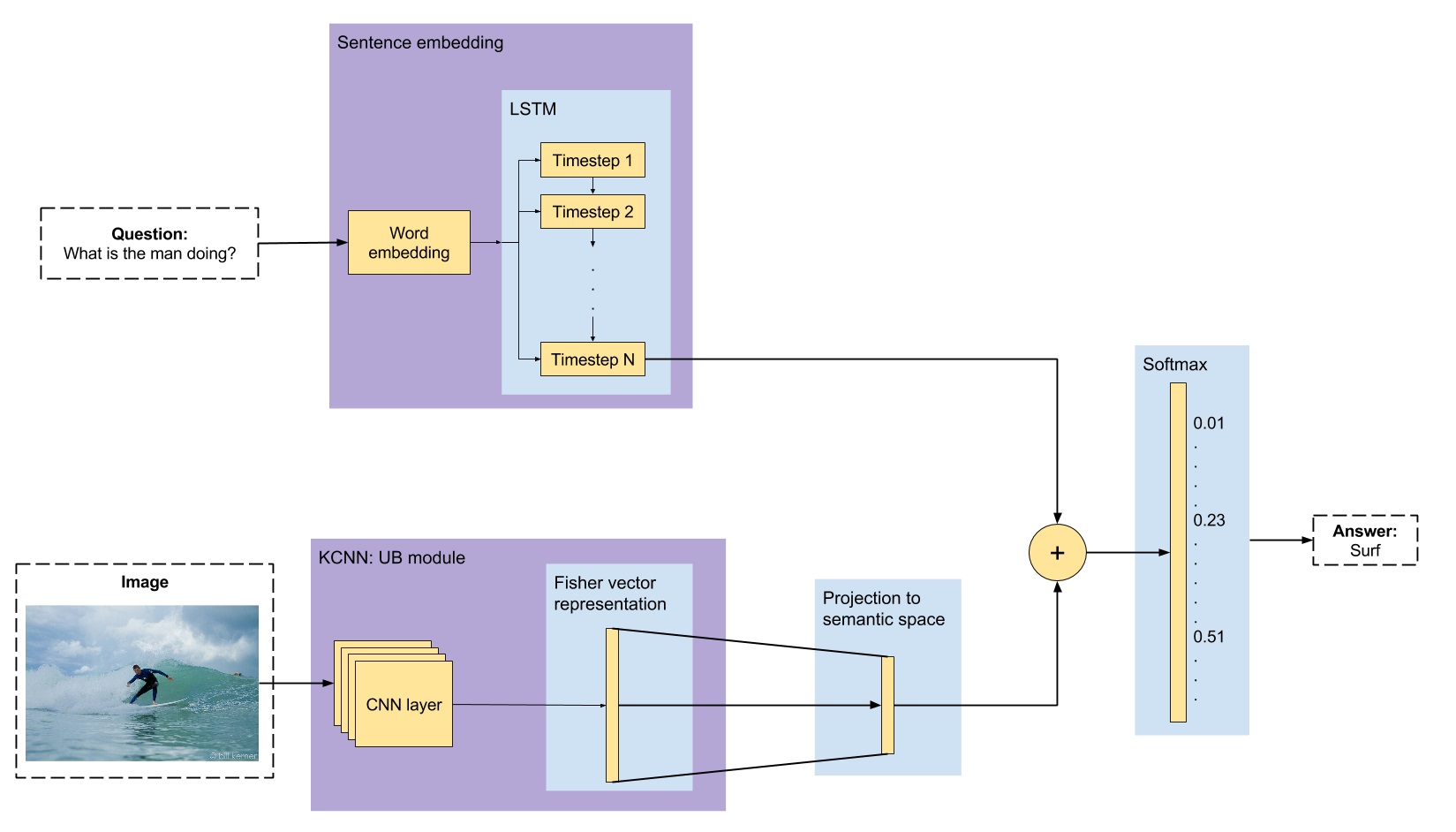